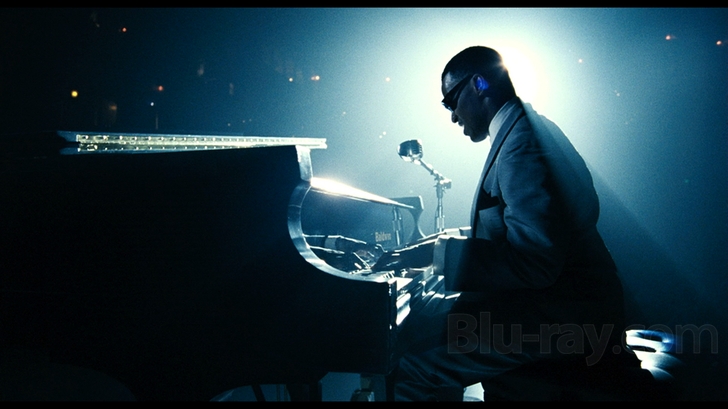 One of the last Universal HD DVD releases to arrive on Blu-ray, Ray features a formidable 1080p/AVC-encoded transfer that looks every bit as striking as a biopic of its caliber should. Pawel Edelman's Deep South photography simmers with wonderfully muted, summer-struck primaries, gorgeous sun-baked skintones and satisfying, at-times savory black levels. All the while, detail never falters and rarely disappoints. Even with smoke hanging in the air and aged-newspaper shadows haunting every back alley club, fine textures remain undaunted, closeups are crisp and refined, and edge definition is sharp and clean (without any glaring edge enhancement to report). Filmic grain is apparent from time to time, but hardly intrusive, and errant white specks are the only anomalies worth mentioning (the most noticeable of which appear ever so briefly on Foxx's apron at the 16:40 mark). Artifacting, banding and aliasing never sully the results, ringing is kept to an absolute minimum, and noise reduction and smearing are nowhere to be found. As it stands, I doubt Universal could have done much more. Ray isn't just vastly superior to its DVD counterpart, it faithfully renders Hackford and Edelman's every intention and represents one of Universal's finest catalog transfers to date. 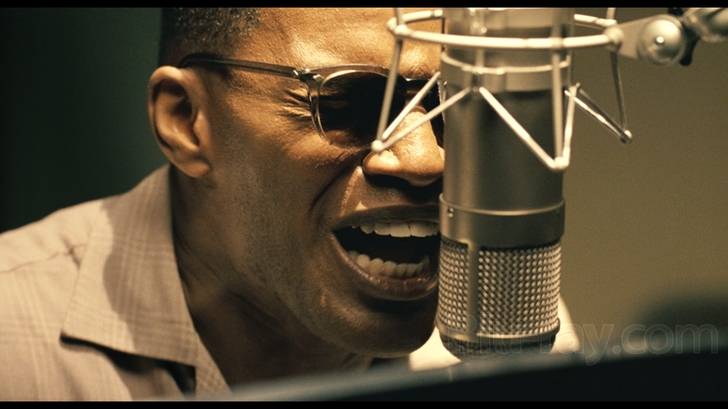 Unless you find a way to visit the Ritz Theater in 1945 or sit in on a Swing Time Records recording session in 1951, the best way to experience the fullness and soulfulness of Ray Charles's music is via Universal's lively DTS-HD Master Audio 5.1 surround track. Whether barking "Mess Around," wailing "Drown in My Own Tears" or crying "I Can't Stop Loving You," his baritone barbs punch through the soundscape, rising above the rich, rowdy roar of his piano and mingling above the bluesy madness of his most spirited songs. But it isn't just his singing voice that receives top-tier treatment. Everything from his band to the clubs he plays in to the chatter of an ecstatic crowd is given its proper due, wrapping the listener in the chaos of Charles's surging celebrity. The LFE channel grabs hold of every bass line and tantrum, lending weight and presence to each dramatic turn in the singer's life. The rear speakers aren't as aggressive as I expected, but there's an ease and effortlessness to their subtlety that showcases the immersive properties of the film's ambience and the nuance of its original sound design. Cross-channel pans are smooth and convincing, directionality is accurate and effective, and the soundfield is enveloping, regardless of how quiet, solemn or frenzied a scene becomes. Moreover, dialogue is clear, natural and neatly prioritized throughout, and only a handful of lesser lines struggle to be heard. It's an absorbing experience to say the least; one sure to envelop and engage audiophiles, casual filmfans and students of Charles's music alike.