About the PSB Synchrony S PSB's Synchrony S speakers give you seamless surround effects along with flexible setup and placement options. Your eyes will appreciate this speaker's simple, sophisticated looks, and your ears will appreciate PSB's precise driver design. They feature two aluminum baffles set at an angle to each other, each containing a 1" tweeter mounted below a 5-1/4" woofer. Their Tri-mode Surround™ design means you can wire them in three different configurations, depending on your setup: 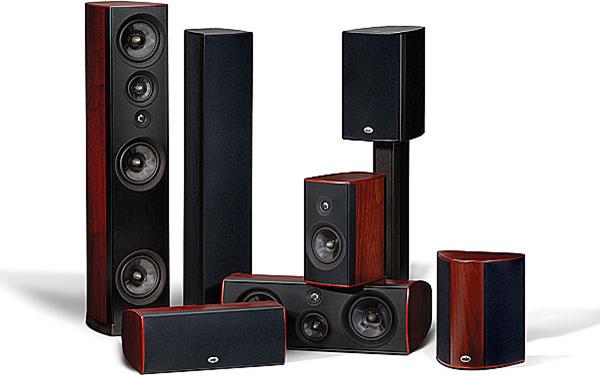 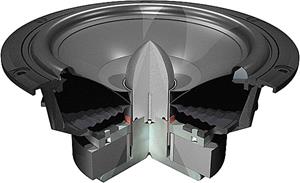 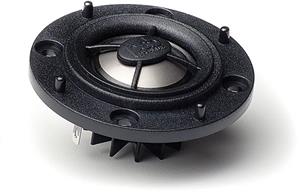 The tweeters use high-flux neodymium magnets to maintain clear, accurate highs, even during dynamic peaks like explosions or cymbal crashes.

PSB's years of design experience and tireless testing at the National Research Council in Canada have led to a superior crossover design. The high-quality components are carefully picked to create the fourth-order crossovers that go into Synchrony speakers. Meticulous engineering ensures minimal driver overlap, with precisely chosen crossover points to maintain proper dispersion. The result is a smooth frequency response over a wide "sweet-spot."

A solid cabinet with a luxurious, real-wood veneer finish 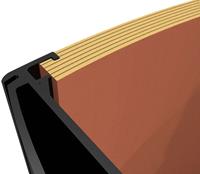 Heavy, rigid cabinets helps eliminate vibrations to to keep the sound pure. The double-walled aluminum side surfaces hold the curved wood panels in place. Each wood panel is constructed using seven layers of MDF, each one individually laminated to improve the panel's stiffness and absorb sonic energy that might otherwise color the sound. The top and side panels are clad in real wood veneer that's hand selected for its beauty and quality.

Most speakers don't include any. Learn about choosing and installing speaker wire at the Crutchfield Learning Center.
Shop our selection of speaker wire.

What's in the box:

Surround Design: A Synchrony S speaker is two 2-way speakers built into one triangular shaped cabinet; each having its own woofer, tweeter, and crossover. The drivers are mounted on baffles facing in different directions, approximately 120° apart. Because the two speaker sections are wired to discrete terminals there are multiple ways to connect the drivers; as a dipole speaker (out of phase using the included jumper wires), as a bipole speaker (in phase using the factory installed jumpers), or as two separate channels. If you're mounting the speakers on the side walls in line with your listening position, the dipole mode will create a diffuse, ambient soundfield. If you're placing them behind your listening position, the bipole mode fires the drivers in phase to flood the area with surround sound. It's also possible to use one pair of Synchrony S speakers for both surround and surround back channels, wiring the forward firing baffles to the surround channels and the rear firing baffles to the surround back channels.

Cone Design: The woofer cones are a laminated sandwich design; each has a fine weave fiberglass layer along with a compressed, felted natural fiber laminate. The result is a rigid cone with added damping properties. The central dustcap offers a second connection to the voice coil to improve bass and midrange control. The inherent distortion resulting from the magnetic field generated by the input signal reacting with the field in the magnetic structure's air gap and the self-induction and impedance that varies with cone movement are addressed using an aluminum shorting ring within the magnet structure, an aluminum phase plug on the pole piece, and a shorted copper turn on top of the pole piece. The aluminum phase plug also mechanically smoothes the response and acts as a heat sink for the voice coil, reducing power compression. The drivers use cast aluminum baskets and rubber surrounds.

Tweeters: The 1" titanium, Ferrofluid cooled dome tweeters have a neodymium motor structure and an aluminum heat sink. The mass (low) and stiffness (high) are optimized for the required wide frequency response.

Cabinet: The cabinet is an integral part of speaker design and has a dramatic effect on the overall sound of a speaker. PSB uses a combination of aluminum and wood in the construction of the Synchrony S. Both speaker baffles are made of double wall aluminum extrusions. The aluminum panels are very rigid and precisely machined with contours to preserve the sonic characteristics of the drivers. The front, top, and bottom panels are seven layers of 3mm MDF, curved for added stiffness, with a wood veneer exterior. While rigid, MDF also has inherent damping properties to absorb energy that might otherwise color the music.

Dual Binding Posts: The dual 5-way binding post input terminals are located on the lower rear of the speaker cabinet. Out of the box the two sets of binding posts are shorted together (in phase) by gold-plated jumpers. With the jumpers removed the two sections of the speaker can be wired out of phase (dipole) using the included jumper wires, or wired to separate channels. The binding posts will accept spade connectors, single or dual banana plugs, pin connectors, and bare wire up to 8 gauge.

Mounting: The Synchrony S can be wall mounted using the included brackets. The bracket adds approximately 3/16" to the depth of the speaker.