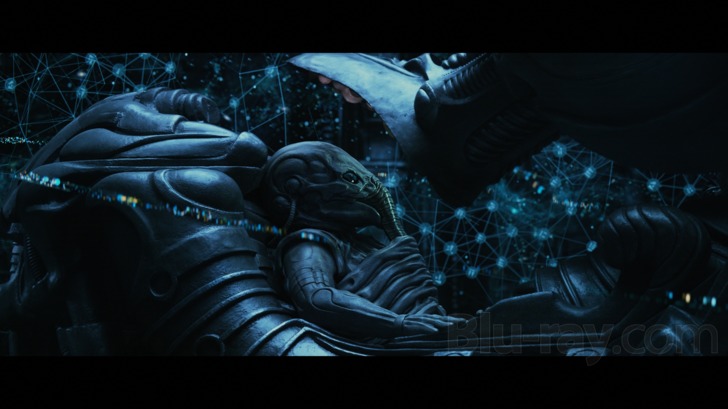 Gorgeous. And that's about all you really need to know. But for the sake of completeness, let's get into what makes Prometheus' 1080p/AVC- encoded Blu-ray transfer so stunning. Using Red Epic digital cameras mounted to 3ality Technica Atom 3D rigs, the film was shot almost entirely on Pinewood Studio's famed—and enormous—007 lot, allowing Ridley Scott and cinematographer Dariusz Wolski complete control over the lighting of the magnificently detailed sets. The combination of a great camera system, high-quality Zeiss lenses, and precise manipulation of the direction and degree of light makes for an image that's often terrifically sharp and nearly noiseless at times. Camera noise does spike a bit during the darkest scenes, but it has a granular quality that looks almost filmic up close, with no digital harshness or chroma artifacts, and it isn't really noticeable from a normal viewing distance. It should also go without saying that there are no compression issues or encode errors on this top-tier release; even scenes where you might expect to see some banding or splotchiness—flashlights cutting through darkness, volumetric clouds of dust rising into the air, fine color gradients—hold up under pixel-peeping scrutiny. The level of clarity is exemplary for a live-action film. Fine detail is ever-present in the textures of the actors' faces, the fabric of their clothing, and the intricacies of the props and set design. The film's distinct color palette is handled with ease too. The inky depths of the pyramid, the yellow LED lights inside the explorers' helmets, the cool fluorescence inside Prometheus, the spatters of blood, the skin tones—everything has a satisfying density and presence.

And then we come to the film's use of 3D, which is some of the best I've seen outside of all-CGI movies. If you saw the 3D version of Prometheus in theaters, you'll already have a good idea of what to expect on Blu-ray, namely, lots of depth and little-to-no projection. That is, you'll spend a lot of time looking into your screen—which becomes a kind of portal through which to view a 3D diorama—but you won't find any leap-out-of-the-TV-and-jab-you-in-the-eye gimmickry, which may work in horror films or cartoons, but would only cheapen the experience here. And because there are no objects jutting out towards you, you don't have to worry about the roughly 2.39:1 frame cutting anything off. (No, there's no 1.78:1 "open-matte" version available.) There are a few longer landscape shots where no dimensionality is apparent, but most of the time there's a clear and natural-looking distinction between foreground objects and their backgrounds. There are definitely some "showpiece" 3D shots, like the landing sequence, the silica dust storm, and the engineer holograms, but the 3D effect is most impressively used to add a degree of realism to some of the more mundane scenes, like when Holloway stares into the mirror of his cabin, noticing there's something unusual in his eye. Or Shaw lying on the all-white operating table. Clarity and color both hold-up well, and there are no unusual 3D anomalies to report. Of course, the effect will be better on bigger screens—and the amount of ghosting/doubling you experience will depend on the quality of your TV/projector/glasses—but in general, Prometheus' 3D Blu-ray replicates the theatrical experience rather well. Do note that all screenshots are from the included 2D Blu-ray. 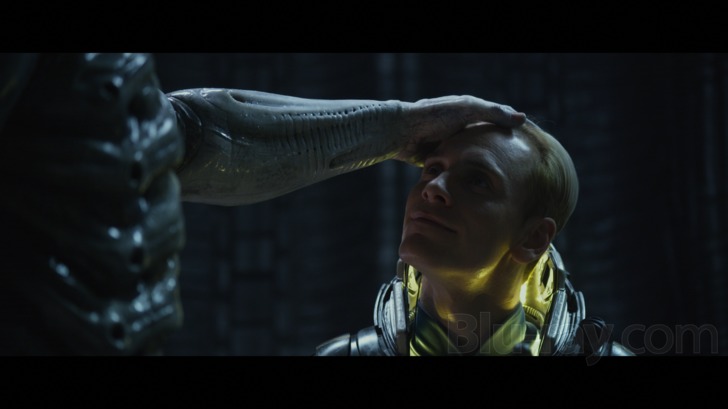 Turn off the lights, crank up your receiver, and settle in—Prometheus's lossless DTS-HD Master Audio 7.1 surround track is one to savor, particularly if you've got a home theater setup capable of bringing the aural goods. This mix just doesn't quit; from start to finish it delivers room- quaking dynamics, pristine clarity, and polished, realistic, puts-you-right-in-the-middle-of-the-action sound design. From the opening scene on the barren planet Earth we get deep sub-woofer engagement, the lapping, crashing, and bubbling of a massive waterfall, and the thunderous rumble of an alien ship overhead. The sense of all-surrounding immersion is near-constant from here forward. Bleeps and bloops and the hush of processed air aboard the Prometheus. Sirens wailing in the rears. Dripping rain. Convincing cavernous reverb. The whipping of a monster's tendrils. Debris from an explosion rocketing through the soundscape. Silica dust clinking furiously as a storm blows across LV-223. Fifield's mapping "pups" as they zoom off through underground corridors. There's not a scene where the audio isn't lushly and thoughtfully arranged. Just take the actors' voices, which—besides being well-balanced and easily understood—always reflect the acoustics of their surroundings, flatter aboard the ship, slightly muffled inside their helmets, echoing and wet inside the pyramid. All this is backed up by Marc Streitenfeld's enormous-sounding orchestral score, which alternates between quiet uneasiness and sheer bombast.

Note that the 3D disc and the 2D disc have slightly different dub and subtitle options.