Be the first to review this product
InFocus

Add to wishlist Add to compare
Vivitek D555 Projectors
Regular Price Rs.105,000.00 Sale Price Unit price: Rs.0.00/
As the first three-chip DLP projector to pass through my studio, the InFocus ScreenPlay 777 generated more than a little excitement. Apart from its futuristic, streamlined appearance, its size and weight—not to mention its price—immediately set it apart from the one-chip designs that have come to dominate the home-theater projection market. 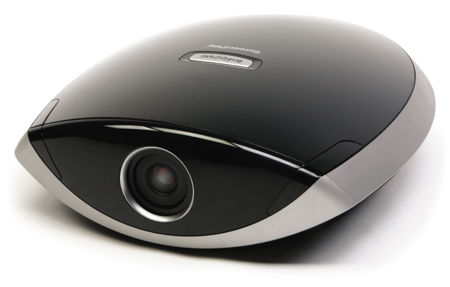 Three-chippers are so new to this market that they still use Texas Instruments' HD2 1280x720 Digital Micromirror Device (DMD), not TI's newer HD2+ design. And now in the pipeline are 1920x1080 chips, still unavailable in any commercial DLP products (they're expected to show up first in rear-projection models). While these are matters that must be weighed by any buyer, it's the ultimate performance that counts. On that basis, the ScreenPlay 777 makes a strong case for itself.

Earth vs. the Flying SaucersWhile the ScreenPlay 777 doesn't exactly look like a flying saucer, it wouldn't appear out of place zooming across the cosmos in a scene from Star Trek XX: When Aliens Attack. Its shiny silver-and-black plastic case is more than a little reminiscent of the Sony Qualia 004 we reviewed back in May 2004, but reshaped into something out of the 24th century. And while the Sony's enclosure is built of heavier aluminum and glass, Admiral Picard might well choose the svelte 777 as his flagship.

Inside is where it all happens, of course, and InFocus has thrown all its bells and whistles at its flagship. The 777 has a wide range of lens options (some of them adding to the price—see the "Specifications" sidebar. Our sample came with a 1.44–1.80:1 zoom, a fairly short-throw design that put the projector relatively close to the screen, even for a 96-inch-wide image. On their website, InFocus provides a calculator with which you can match projector distance to screen size; you should consult it before choosing a lens.

All but two of those lens choices offer fully powered zoom and focus, along with a generous vertical lens shift and a small but useful horizontal shift. In our sample, a lens shield covered the bottom third of the lens. When I asked InFocus about it, they indicated that it should be left in place. Designed to block stray light—which would spray onto the ceiling if the 777 were mounted there—it had no discernible effect on the picture.

Illumination is provided by a 250W lamp. The 777 has neither a lens iris nor an adjustable lamp setting; the only way to cut down its substantial light output for a given size screen (apart from using the video controls, which will also reduce the projector's peak contrast, as shown in the "calibration" sidebar) is to use some sort of neutral-density filter. The 777's lenses do not provide threads for a standard photographic filter, but a promised adapter will allow for this (see "Setup and Performance," below, for more on this).

A generous selection of inputs is provided, including three component connections (RCA, BNC, D5) and two additional ways to input HDTV component (or RGB) sources: via HD-15 and M1-DA connectors. The latter is something of an all-purpose connector that no other company I know of uses in a home theater projector. It accepts not only component and RGB analog, but DVI (with HDCP) and HDMI inputs as well, though all of them require special adapters for compatibility with the standard connectors used in home theater systems. These adapters are not included with the ScreenPlay 777 as standard equipment. InFocus sent me one quickly when I needed it, but in my opinion they should be included with every unit sold. (Oddly, the projector did come with a SCART adapter for the D5 input; SCART is a European connector not used in the US.) Even better, I'd like to see InFocus provide a dedicated DVI-D or HDMI input (as do all the other projectors we've tested recently), so installers can avoid adapters altogether. There seems to be more than enough real estate on the rear panel for DVI-D and HDMI jacks.

There are more connections on the jack panel: an IR repeater, RS-232 (for control and software updates), and two 12V triggers for various screen operations, including drop/retract and masking curtains.

Despite its substantial size, the 777's overall weight of just under 45 pounds is not difficult to manage. I used it on an adjustable, movable stand, but ceiling mounting should present no unusual challenges. A removable panel that blends in with the case's rounded shape conceals the connections and wires.

One notable omission was an owner's manual. Fortunately, InFocus provides an "Installer's Guide" on its website, from which I downloaded mine. A skimpy "Owner's Guide" is included, but the only useful information it contained, apart from instructions on how to change the lamp, was a two-page description of the warranties. Of particular interest is the description of the lamp coverage. The installed lamp is warranted for 90 days or 500 hours, whichever comes first, but any spare lamp purchased when you buy the projector is guaranteed for 500 hours, no time limit. It's probably a good idea to buy that extra lamp ($899) right away for that Saturday movie night when the original lamp gives up the ghost as your 10 guests wait with bated breath to see how Fahrenheit 9/11 will end.

Feature AttractionsThe ScreenPlay 777 is controlled from an illuminated remote that looks exactly like those accompanying other InFocus products we've reviewed. It's relatively easy to find everything on it even without the backlight. Once you've set everything up, you can save up to three settings in preset memories, and you should—on at least three occasions, I accidentally brushed against the remote and, for reasons still unknown (the remote has no Reset button), I reset everything—including my calibrated gray-scale settings—to the factory defaults. Luckily, I'd written all the numbers down.

The 777's user menu offers a wide range of controls, including RGB color-temperature calibration for both the top and bottom of the brightness range. There's the usual selection of aspect-ratio settings, including a progressive stretch mode for 4:3 material, for those willing to trade a little distortion for a full-screen image on noncritical program material (use it on Casablanca and you're off our gift list!).

The Gamma control provides presets "optimized for the input source." I used the Film setting most of the time—even for some video material—and rarely felt the need to change. The Overscan control cuts off a bit of the image border to minimize the noise that's sometimes visible there (I left it Off). The Phase, Tracking, Horizontal/Vertical position, and Sync Threshold Adjust controls are for locking in computer and HDTV sources; I never needed to touch them.